Giovanni Galizzi, The Adoration of the Shepherds (detail), 1555-1560. Oil on canvas, EPMA, Gift of the Samuel H. Kress Foundation.

EPMA’s European collection ranges from the thirteenth to the eighteenth century. The core of the European holdings is the Kress Collection, an outstanding group of fifty-seven tempera and oil paintings and two marble sculptures. The Kress Collection includes a thirteenth-century Byzantine Madonna, several outstanding Baroque pictures, and significant paintings of the 18th century. The gift of this extraordinary collection came from the Samuel H. Kress Foundation, which in turn laid the foundation for the establishment of EPMA. The Kress Collection has fostered continued donations which have added to the European, Mexican, American, and Contemporary collections through the years.

Predominantly Italian in origin, the Kress Renaissance paintings include altarpieces as well as portraits and mythological subjects by masters such as Filippino Lippi, Benedetto Bonfigli, Sano di Pietro, and Lorenzo Lotto. Works from the later periods of the Baroque and Rococo are more internationally diverse, including significant pieces by the Spanish Golden Age masters Jusepe de Ribera, Francisco de Zurbarán, and Bartolomé Esteban Murillo, and the French portraitists Hyacinthe Rigaud and Alexis-Simon Belle. Apart from the central Kress Collection, EPMA’s European holdings include numerous Old Master and modern works on paper.

In 2010, EPMA published a bilingual, 300-page catalog, European Treasures: International Gothic through Realism | Tesoros Europeos: Gótico Internacional hasta el Realismo, featuring scholarly entries on each of the fifty-nine artworks in the Kress Collection, as well as eight entries on significant artworks from EPMA’s other European holdings. The publication was made possible in part by the generous support of the Samuel H. Kress Foundation, the National Endowment for the Arts, the El Paso Museum of Art Foundation, and the City of El Paso. 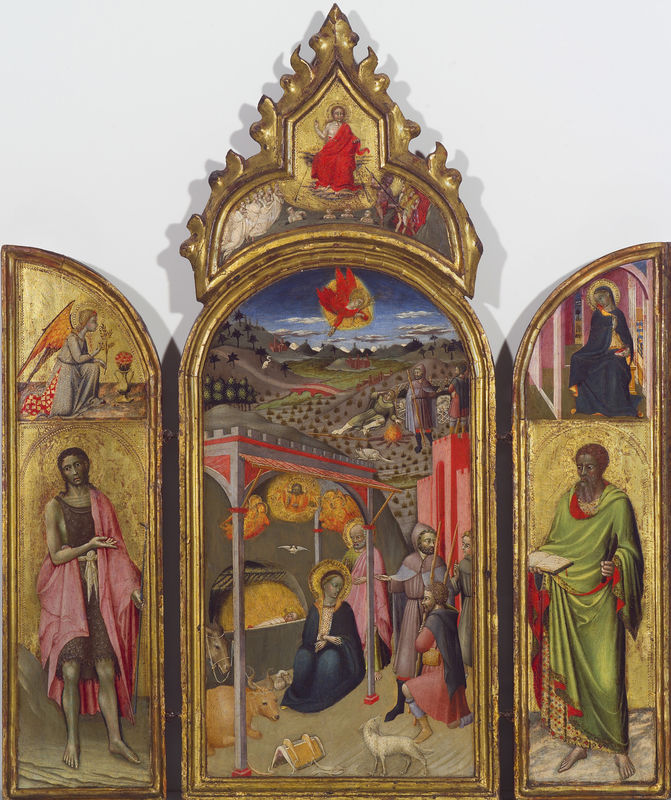 Master of the Osservanza, Adoration of the Shepherds with Saints John the Baptist and Bartholomew, about 1440, tempera and gold on wood panel, EPMA, gift of the Samuel H. Kress Foundation.

In a series of animated videos, select masterpieces from EPMA’s Kress Collection of European Art are highlighted. This remarkable collection spans more than five centuries and encompasses Italian, Spanish, French, Flemish, and Dutch masterworks from the most celebrated names in the history of art. These videos were made possible with the generous support of the Samuel H. Kress Foundation. Visit EPMA’s YouTube channel for more videos.

Explore the Kress Collection at your own pace and take in some of the signature works of art found within one of the largest collections of European Art in the Southwest!

Click on each image below to see and hear about each piece.

What have you always wanted to ask the museum?